0 out of 5 based on 0 customer ratings

Shakespeare in Court is a radio play by Alexander Waugh, presented as a 2-CD set with 28-page booklet.

Shakespeare in Court is a radio play by Alexander Waugh, presented as a 2-CD set with 28-page booklet.

In 2013 the Shakespeare Birthplace Trust of Stratford-upon-Avon, a UK registered charity, was given the opportunity to collect £40,000 by convincing a panel of British judges that William Shakspere of Stratford-upon-Avon was the true author of the plays and poems commonly attributed to him. Fearful that the verdict might go against them, the Trust refused to participate.

In this confrontational and comic courtroom dramatization showing what might have happened if the Birthplace Trust had been brave enough to take the stand, Sir George Greenwood cross-examines a typical Stratfordian blogger, Nat Whilk, on her belief that Shakespeare’s works were written by an illiterate butcher’s apprentice from the British Midlands. 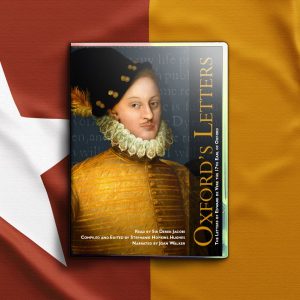 Oxford’s Letters: The Letters of Edward de Vere, the 17th Earl of Oxford